This is a guest post from John Westgarth, ‎State Manager (NSW/ACT), Digital Careers at NICTA.

Last December, Ryan Seashore, CEO and founder of CodeNow, put up his thoughts on the learn-to-code movement – where it’s at and where it needs to be. I like this article for several reasons. First, it attempts to put a time line around the host of initiatives – making it very clear how recent most of them are. Second, it adds structure to the movement and distinguishes between the different players.

Here’s how Seashore broke them down:

Awareness: the purpose of these organisations is to raise awareness of the need for increased computer science/coding education. The main player here is Code.org, with Made with Code also referenced. Success is measured in terms of publicity, social media and uptake of campaigns such as Hour of Code and Computer Science Education Week. [JW note: I’m pretty sure Code.org would argue that, through their teacher support materials, they moving well down the chain into the exposure and immersion categories, but in general, they play an important role in raising awareness of this issue]

Exposure: main goal of these organisations is to give students a taste of coding as a discipline. The idea is to give students exposure so they can then decide if it’s an area of interest they might want to pursue in college. Players: CodeNow, Black Girls Code, CoderDojo, Technovation, Rails Girls, etc. Success is measured by the number and diversity of students that attend the programs.

Immersion: a subset of the exposure groups – here the aim is to bridge the gap between the first 5-30 hours and full-blown curriculum. Programs include SMASH, Girls Who Code, TEALS, ScriptED, UrbanTXT. Once again, success is measured by number and diversity of attendees.

Online: these are online courses, often free, from CodeAcademy, Khan Academy, CodeSchool and MOOCs facilitated through Coursera and Udacity. These can range from hour-long tutorials through to 8-12 week courses. Here Seashore comments on the frequently quoted 5% completion rate and the huge amount of self-discipline needed to actually finish the courses.

The ‘where to from here’ section of Seashore’s article touched on a few things: a) the creation of a national association to coordinate the linkages between all the above organisations – to help them move up the education ladder, b) setting public goals for education, c) pushing the public to challenge the government to make coding mandatory in schools, and d) pushing tech companies to do more than just donate money – they can play an active role in educating students and taking interns. 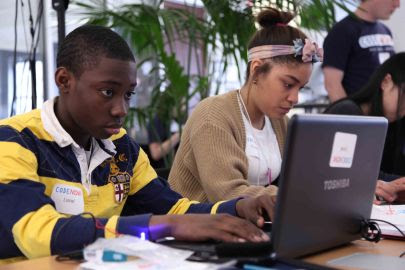 This site uses Akismet to reduce spam. Learn how your comment data is processed.

Student competitions involving coding and technology are proliferating. They are a fine, fine thing and a great way to incentivise

It’s a crime to be a woman on the Internet

Technology and ethics: pretend someone is watching

When maps lie, and why it matters

Why LEGO costs more in Australia

Teach kids to type, and they’ll have all the fish they want